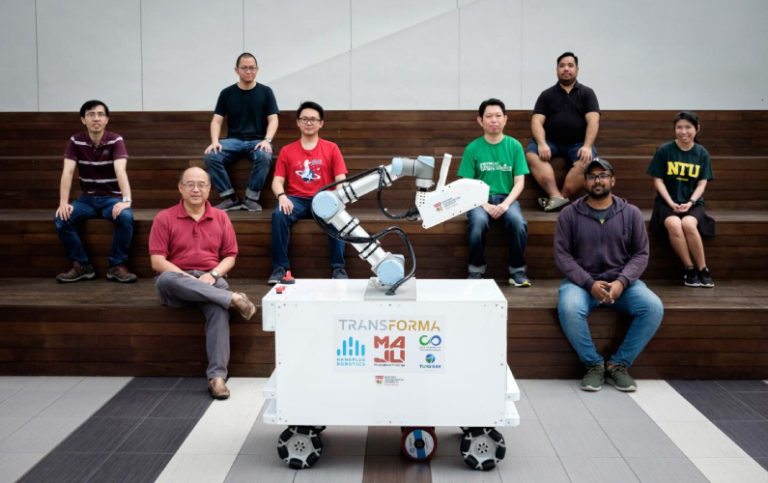 A semi-autonomous robot designed to disinfect large surfaces quickly is going on public trial as part of Singapore’s strategy to fight COVID-19.

During the outbreak there is increased national demand for deep cleaning and disinfection services. According to news reports, working hours for cleaners have doubled to 16 hours a day in some cases due to the manpower shortage.

The eXtreme Disinfection roBOT (XDBOT) has been developed by researchers from Nanyang Technological University in Singapore (NTU Singapore). It can be wirelessly controlled via a laptop or tablet, meaning cleaners do not have to be in contact with surfaces.

Developed and built on the NTU Smart Campus, the robot went from a theoretical concept to an operational prototype in two months.

Comprising a semi-autonomous control unit with motorised wheels, XDBOT has a six-axis robotic arm that can mimic human movement to reach awkward locations such as under tables and beds, as well as doorknobs, table tops and light switches.

Instead of a pressure-spray nozzle, it uses an electrostatic-charged nozzle to ensure a wider and further spread of the disinfectant, behind and over hidden surfaces.

The nozzle discharges chemicals with a positive electrical charge and those disinfectants are then attracted to all negatively-charged surfaces. Surfaces already covered with the disinfectant will then repel the spray.

“To stop the transmission of a virus means we need a way to quickly disinfect surfaces, which is a labour-intensive and repetitive activity,” explained Professsor Chen I-Ming, project leader and a roboticist from the NTU Robotics Research Centre.

“Using our new robot from a distance, a human operator can precisely control the disinfection process, increasing surface area cleaned by up to four times, with zero contact with surfaces.”

At the moment XDBOT can be controlled by the operator from up to 30 metres away using a laptop or tablet. This can be increased to 50 metres or more with more antennas installed on the machine.

The robot has an 8.5-litre tank that can carry a variety of disinfectants appropriate to different environments, and it can operate for four hours continuously on a rechargeable battery pack.

Battery recharge currently takes eight hours but the researchers say this can be further improved if quick-charging technology is adopted.